God’s King takes on God’s enemy and wipes him out!

David, a shepherd boy from Bethlehem, a young man with a heart that loved God. 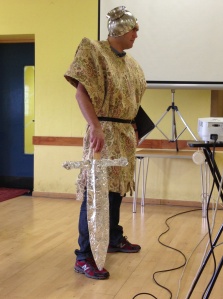 He hated God and skitted His people.

David knew that God was bigger still, and that just like God had helped Him to fight bears and lions away from his sheep, God would help him fight the Philistines away from His people.  He refused the armour of Saul, the people’s choice of King, who despite his handsome height was no help at all!

David sets off with stones from the stream. 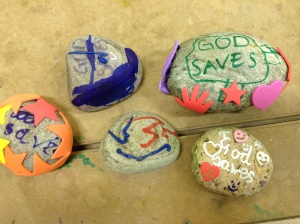 They wouldn’t have looked like this at the time!

Goliath laughed in David’s face, laughed at his faith, laughed at His God.  Goliath got 1 stone from David’s sling in the head, he fell down! David killed Him! 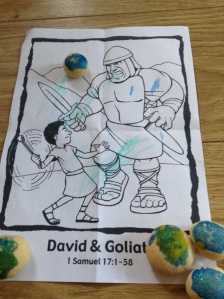 What an amazing victory! When the people saw what David had done, they remembered how Big God was and piled in after him to join in the battle, and beat their enemies. 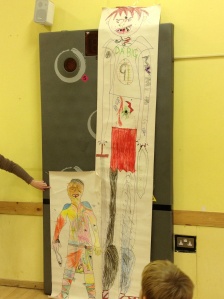 The enemy was massive! Check out drawn to scale “Big G”

The King and his weapon seemed small; but God’s chosen King from Bethlehem beat Goliath with a stone.  Jesus God’s forever King, a boy from Bethlehem, with a heart after God’s takes on the hugest enemy of sin, all the laughing in God’s face, all the skitting and nastiness and evil and beats it by taking it to the cross.  It seemed a strange way to win a battle, but it worked! The stone was rolled away, Jesus rose to show he had won!

Does this mean we can throw rocks at people who skit us?

read Isaiah 53, this was written to tell us what God’s forever King would do.

How does Jesus respond to people who laugh at him?

The big problem of sin is not just about how other people treat us, it’s how any of us treat God.  People who laugh at you for following Jesus don’t know him, the only reason you are different us that God has saved you.  Perhaps they need you to tell them about our great saving God. 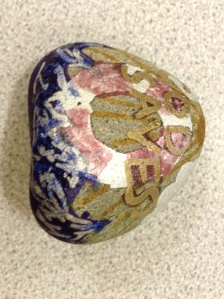